Some Important and Fun Wedding Rituals We All Love India is a country that is rich in culture as well as rituals. And when talking about Indian weddings, it is a very sacred ceremony consisting of many timeless rituals and customs. It is said that marriage is the bond through which not only two hearts meet, but two families meet. After the wedding, the life of both the families including the bride and the groom changes completely. It is always fun to attend Indian wedding ceremonies, as all rituals are celebrated as festivals. In today's time, the craze of destination weddings has increased, which is held at a location different from either of the couple's hometowns. However, all the wedding rituals are always enjoyed to the fullest. Here we are discussing ten of them.

Engagement is considered one of the most important wedding rituals in Hindu weddings and other religions. This event usually takes place a few days before the wedding. During this program, the heads of both families formally announce the marriage of their children to the guests. After this, the bride and groom change the rings to strengthen their relationship.

This is a ceremony when the bride is decorated with fascinating henna designs. After applying henna, the bride has to sit for several hours so that the color shines well on her hands. The female guest present in the house also gets henna applied to her hands. This joyous festival is often celebrated by singing traditional songs. Henna is the symbol of love and affection between the couple and their families.

It is one of the most fun kinds of wedding rituals enjoyed by all the women of the family. It involves a lot of singing and dancing where all the women of the family gather to enjoy the moment and make it more interesting. It is worth noting that this event is fun, but wedding planners also swear that it allows both families to forget the worries of the wedding for a while.

This is the most crucial step of any wedding. This ritual connects both families and establishes a  firm bond between them. A few days before the wedding, the bride's father or his brother accepts the bond and applies tilak on the groom's forehead. This event takes place mostly at the groom's residence where both the families show sweet gestures to each other.

This event is one of the most-awaited and fun-loving, as all the family members bless the bride and the groom through the touch of turmeric paste. This ritual brings good luck to the couple and the family. This event is usually held after the Mehendi ceremony and followed by the wedding.

It is a celebratory wedding procession that involves the groom's arrival at the wedding venue along with his relatives and friends for the wedding. This is one of the most crucial wedding rituals as it is once in a lifetime celebration. This event triggers the joyous mood of both the families, the groom reaches on the white horse known as ghodi. 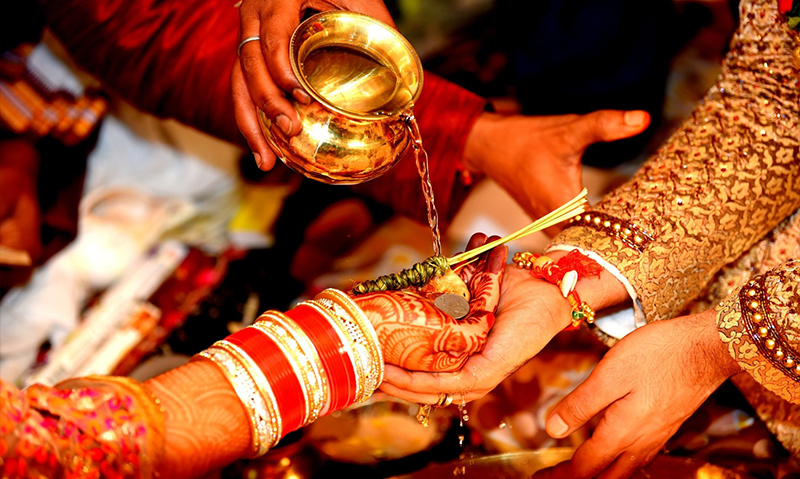 The ceremony of kanyadaan is a very delicate moment for the parents of the bride. During this, the bride's parents pour holy water in their daughter's hand and keep it in the groom's hand. During this, a knot is tied in the bride's sari which contains betel nut, copper coins, and rice, which is considered as a symbol of unity, prosperity, and happiness. symbol.

Every marriage is incomplete without the Mangal Phere ceremony. In Mangal Pheras, the bride and groom walk around the fire. In the first three rounds, the bride walks forward which represents divine energy. Whereas in the last four rounds the groom walks forward, which signifies balance and perfection. The bride and groom, taking seven vows with seven rounds, take a vow to keep agni together as a witness for the rest of their life.

It's a unique and fun tradition of an Indian Wedding done by the bride's sisters, while the groom is busy getting married. In this ritual, the bride's sister hides the groom's shoes, and instead of giving them, back, asks for money from the groom. The groom had to give money to gets his shoes back.  This fun game usually firms the newly established bond between both families.

This ceremony is the most emotional part of the wedding. During this ritual, the sorrow of being separated from her daughter is reflected in the eyes of the bride's family in the form of tears. Before crossing the door of the house, she throws three handfuls of rice and coins over her head at her house. This is the toughest part of the wedding for the bride as well as for the bride's family. However, all bless the couple for a happy married life. The Perfect Wedding Gift for your to-be

A wedding is an occasion on which a newlyweds couple is going to start a new lif...

Weddings in India are a grand parade and like anywhere else in the world; the st...